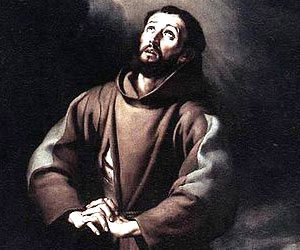 Honoured by the Catholic Church as the Patron Saint of animals and ecology, and even Italy, St. Francis was the founder of the Order of Friars Minor, more popularly known as the Franciscans. He is also considered the first Italian poet by literary critics. Apart from being regarded as valuable religious texts, his works have great literary value as well. St. Francis called for simplicity of life, poverty and humility before God. He led his life serving the poor and needy.

Francis was born at Assisi, in Umbria, in 1181. One amongst the seven children of Pietro di Bernardone and his wife Pica Bourlemont.

Francis loved songs, poetry and daydreams, was a good businessman, and aimed to be a noble and knight. His wish was granted, as Assisi declared war on their enemy, the nearby town of Perugia, and Francis went to war. While most of the troops from Assisi were killed, the wealthy ones were captured so that they could be ransomed. Though Francis was chained and kept in a harsh, dark dungeon for about a year, he resumed his usual carefree life. In 1204, he was struck by a serious illness that led him to follow a spiritual path. After his pilgrim trip to Rome, Francis had a mystical vision of Jesus Christ in the Church of San Damiano, just outside of Assisi, wherein he was asked by Christ to save the ruined church. Though his father tried hard to alter Francis’ mind, every attempt was in vain. In the last meeting with his father, in the presence of a bishop, he abandoned his father and his patrimony, and even the clothes that he had received. After about two years, Francis restored several ruined churches, out of which Porziuncola, the little chapel of St Mary of the Angels, was his favourite.

Founding of the Order of Friars Minor

Inspired by a sermon on Matthew 10:9 (in which Christ has encouraged people to renounce everything and go forth and proclaim the Kingdom of Heaven), Francis devoted himself completely to a life of poverty. Barely clad and barefooted, he started preaching the value of repentance. Within a year, Francis had 11 followers, but he did not wish to be ordained as a priest. His small community came to be known as ‘lesser brothers’.

In 1209 Francis, along with his followers, went to Rome, to seek consent for a new religious order. The Pope admitted the group informally, with the clause that when the group increased both in number and grace, he would make them official. The group was tonsured and Francis was ordained as a deacon.

After being informally recognized as a group, the new religious order of Francis grew dramatically. In 1211, Francis established the Order of Poor Dames, upon receiving Clare at the Porziuncola, which was later called Poor Clares. In 1220, at Christmas, Francis had set up the first known three-dimensional presepio or crib, in the town of Greccio, near Assisi. The idea being to get the onlooker to contemplate the real scene during the time of Lord’s birth. In the next two years, 1221 and 1222, Francis travelled to Sicily and Bologna. In 1223, Pope Honorius III finally approved the final rule of his order. It was during this time that Francis had a vision on the Feast of the Exaltation of the Cross, as a result of which he received the stigmata.

Though Francis got treatment for the Stigmata and an eye disease in several cities, it brought no relief. Returning to Porziuncola, he was taken to transito, the hut for sick friars. Francis spent his end days in this hut, dictating his spiritual testament.  He died on the evening of October 3, 1226, while singing Psalm 141.